During their evolution, the scorpions have adapted to a vast diversity of habitats. Therefore there are some species specialized to survive in certain environments; that is to say, the place where the scorpions grow and from which they obtain the necessary resources to survive.

Some researchers classify the habitat of scorpions into three zones that have specific characteristics.

Several species of small scorpions with a length less than 35 mm penetrate to the intertidal zones of the Earth, and because of this, they have the name of coastal scorpions. They feed on small animals and sea creatures in a state of decomposition.

Some scorpions can withstand heights of more than 5,000 meters.

Many of the species living in tropical regions settle near termite mounds and feed almost exclusively on them.

Only some genera of scorpions can withstand the temperatures and heights of more than 5,000 meters. This type of scorpions is small and live for months under the rocks or in burrows covered with snow.

The distribution of scorpions comprises subtropical and tropical regions around the world. They are absent from the icy climates of Antarctica and other areas of intense cold, but there are records of scorpions living in some regions of the Himalayas, which again remarks their high adaptability.

25 of the most poisonous species inhabit North Africa, India, the Middle East, Mexico and some parts of South America. Based on cases and scientific research, the Australian scorpions are not lethal to humans as has always been thought, regardless that this place is known to have some of the wildlife with the highest levels of venom toxicity.

Scorpions live in a wide variety of habitats including tropical forests, monsoon forests, temperate forests, savannas, prairies, deserts and semi-desert regions with extreme temperatures. Sandy soil or covered with dirt or litter are preferred places for them. They walk on rocks, cobbled ground, caves, epiphyte plants, tree trunks, and branches. 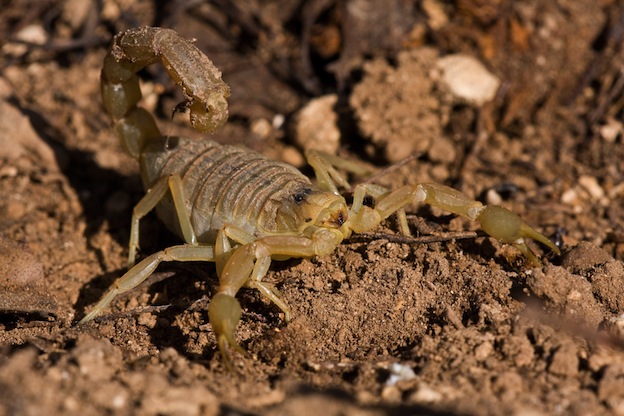 Scorpion in their natural habitat

Scorpions also dwell in urban places, but the difference is that they are at greater risk of being killed or exterminated, since most people perceive them as a danger and will not take any chances.

Tree scorpions have extraordinary abilities to climb to high trees.

The anatomy of scorpions goes hand in hand with their type of habitat and their way of life. Let’s look at some examples.

Tree scorpions are usually small and have extraordinary abilities to climb to high trees or constructions. Those who live in sandy soil have long and thin legs that allow them a better balance and avoid sinking in the loose sand. Rock dwellers have a flatter, elongated body with curved elements in the legs for easy movement and better adhesion to rocks and crevices.

Scorpions that move through burrows are corporally thick and short-legged, but they have long and powerful pincers and pedipalps. Dark cave dwellers do not require their sight to feed or perform any survival activity, so their eye size is very small or, in some cases, completely absent.