It is one of the best-known species of North America due to the danger it represents for humans. It belongs to the Buthidae family and the genus Centruroides, along with another 69 species.

The Centruroides sculpturatus have a length of 2.7-3.1 inches and males are larger than females.

They are yellow with marked horizontal lines in the mesosoma; The tail is thin with a small telson and a stinger with a very pronounced curvature.

They are stealthy predators with very fast and efficient movements, and although they appear to be less harmful than black and large scorpions, they have one of the higher levels of toxicity in their venom.

Like all other scorpions, they have fine hairs all over their body which they use to recognize the terrain and to detect their prey and threats. They have eight articulated legs and thin, but firm pedipalps which they use to hold their victims.

They have one of the higher levels of toxicity in their venom.

As their name suggests, these scorpions are common in Arizona, but they also inhabit regions west of New Mexico, southern Utah, southern Nevada and the states of Sonora and Chihuahua in Mexico.

Because of their size and ability to move, they can easily hide in their natural environment and conceal from many of their threats. They are very well adapted to hot climates since their body is resistant to the loss of water.

In the wild, they lie under rocks, crevices, and trees, but they are also easy to find indoors, especially in sinks, tubs, drawers or dark cabinets. 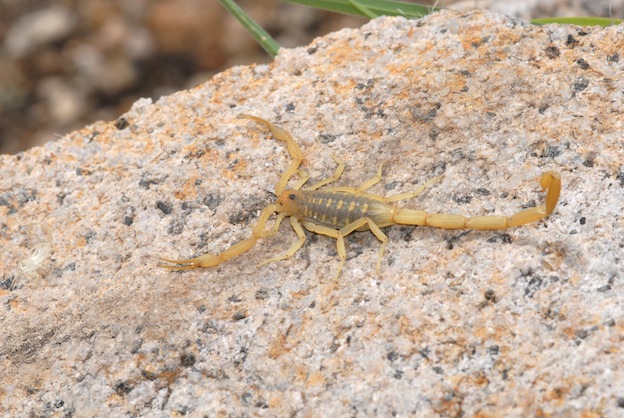 They are nocturnal animals that ambush their victims. They feed on small and medium animals like beetles, spiders, crickets, cockroaches and other insects. They are also known for performing acts of cannibalism.

Because they inhabit warm climates, in the winter months they hibernate in groups (approximately 20 to 30 individuals).

Unlike spiders that lay eggs and wrap them in a silk sack, the scorpion offspring are born alive without the need of any external incubation. The mother has 25 to 35 scorplings usually in the summer months which stay next to her, specifically on her back for up to three weeks. After this time, they make their first molt and can begin an independent life. When giving birth, the females remain immobile and do not exhibit hostile behavior toward their defenseless offspring.

This species has a life expectancy of six years.

The venom of the Arizona bark scorpion is dangerous for humans. Besides causing severe pain in the affected area, there is tingling, vomiting and general illness that can last from one to three days.

Although the cases of death are a few, the authorities issue alerts to protect pets, young children, and older adults, who are very vulnerable to the dangerous consequences of stings, as children do not have sufficient defenses to reject the poison and the elderly usually have a weak state of health.

Effective antivenoms are currently available for treating the stings of the Centruroides sculpturatus, although it is important to stay always alerted and avoid distressing moments.

The main predators of this type of scorpion are centipedes, lizards, tarantulas, shrews, bats, mice, owls and grasshoppers.

Because of the fear they provoke, human beings have no intention of keeping them alive when they encounter one of these scorpions, which is considered a type of threat to the members of this species. Such encounters between people and scorpions are a sign of the increasingly smaller spaces for these arachnids.